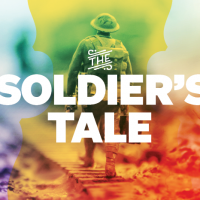 A message from the New Zealand Symphony Orchestra:

The New Zealand Symphony Orchestra has had to cancel performances of The Soldier’s Tale in Dunedin, Oamaru, and Ashburton this week, 16-18 June, due to conductor Hamish McKeich becoming unwell.

Hamish, NZSO Principal Conductor in Residence, fell ill on 11 June after a performance of The Soldier’s Tale in Manukau.

He is in a stable condition in hospital. His family have asked that his privacy is respected while he recovers.

The NZSO’s thoughts are with Maestro McKeich and his family and we wish him a speedy recovery. He has had a close association with the NZSO for two decades and previously was a member of the Orchestra.

The NZSO is heartened by the many messages of support Maestro McKeich’s family have received in the past few days from across Aotearoa New Zealand’s arts community, including The Soldier’s Tale touring partner the Royal New Zealand Ballet.

We appreciate the patience and understanding our audiences and supporters in Dunedin, Oamaru and Ashburton have had for The Soldier’s Tale tour after the performances were postponed in March due to Covid-19 restrictions.

We also appreciate the understanding from audiences and supporters in Kerikeri and Whangārei for us having to cancel our weekend performances at short notice.

Refunds are available and we will confirm this process with our patrons ASAP. If you purchased your tickets online you will be automatically refunded.

Composed in 1918, The Soldier’s Tale’s first tour was cut short by the Spanish flu but it has remained a perennially popular work ever since. Written “to be read, played and danced”, The Soldier’s Tale tells the story of the titular Soldier who makes a deal with the Devil: in exchange for the Soldier’s magic violin, the Devil will grant his every wish. This work is based on a Russian folk tale, was co-created with Swiss writer C.F. Ramuz, and gave Stravinsky the chance to display and include all of his favourite musical influences.

You’ll hear tango, waltz, ragtime, Jewish klezmer, church chorales, and the Spanish paso doble all brought together in Stravinsky’s intoxicating score. In theatres and halls across New Zealand, actors, dancers from the Royal New Zealand Ballet, and an ensemble from the NZSO will present this classic tale of magic, desire and being careful what you wish for.